1 Did you click? Which link? Your choices disclose your fate.

2 You saw that coming. 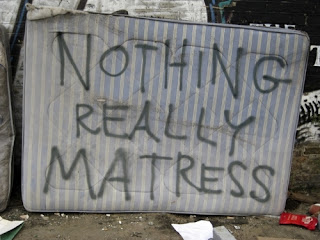 Religion and Science converge on an unacceptable answer

Fatalism seems to have past its use-by date. The idea that the future is predetermined is something you expect from ignorant zealots, not civilized thinkers. However, if you take science seriously then eventually you come to the conclusion that the universe is controlled by inescapable forces. Science and Religion seem to converge on Determinism.


1. (Philosophy) the philosophical doctrine that all events including human actions and choices are fully determined by preceding events and states of affairs, and so that freedom of choice is illusory. Also called necessitarianism. Compare free will [1b]
2. (Philosophy) the scientific doctrine that all occurrences in nature take place in accordance with natural laws
3. (Physics / General Physics) the principle in classical mechanics that the values of dynamic variables of a system and of the forces acting on the system at a given time, completely determine the values of the variables at any later time
determinist n & adj
deterministic adj

The debate over Determinism v. Free Will has been ongoing since antiquity. But findings in the fast-moving fields of neuroscience and behavioral psychology tend to support the deterministic theory. Emotions, desires, decisions, even our aesthetic senses can all be traced back to physical structures and events in the brain. There has been notable dissent from scientific and philosophic luminaries such as Epicurus, drawing on principles such as atomic swerve, and Karl Popper, drawing on Heisenberg's Uncertainty Principle; but on the whole, science is on track to definitively demonstrating the reality of Determinism. It seems inevitable. We should resign ourselves to the fact that physical, psychological, and spiritual reality manifests itself according to inexorable principles of cause and effect.

So what is a right-thinking upstanding member of the congregation supposed to do about it? Calvinist members of the Christian Dutch Reform Church believed in unconditional predestination to salvation, meaning that that they were already destined to land in either heaven or hell and nothing they did could change it. This was an unpleasant fact that Calvinists had to come to terms with, and I like how they did it. Their response was to take the view of highly engaged spectator to life. Although they couldn't change their final destination, they could watch their own actions carefully for evidence of where it would be. This stance seems like a sensible response to the situation, and not entirely depressing. It's like watching a long football match (what you might call Mancunian Mindfulness1).

Douglas Adams can pick up where Calvin left off. In The Hitchhikers Guide to the Galaxy, the earth is revealed to be a supercomputer designed to calculate the meaning of the answer to Life, the Universe, and Everything.

Let's say reality does operate according to unswerving principles of cause and effect. Say we can understand these rules completely, in the form of something like an algorithm. Say we know the starting values of every variable in the algorithm. Can we predict the future?

In principle, yes, we could predict the future. But practically, we'd need to actually perform the calculations. A chalkboard won't do; we'd find we had fallen behind the future we were trying to predict even before the first squeak of chalk on slate. To run the calculations, we'd need an amazing complicated calculation machine, the ultimate reality engine.

Which leads to a pair of questions I've been puzzling :


Does it make any sense to say something is pre-determined if no entity (man or machine or hyper-intelligent pan-dimensional being) knows or can know the outcome?

I think the answer is no; because if nobody knows the outcome, it's not pre-determined. So,


If something is not pre-determined, can it be deterministic?

Again, I think the answer is no. Any other solutions I have found are unacceptably convoluted.

Religion and Science are both wrong and I am right

In summary, here is my contribution to the metaphysical debate over Free Will:
And what about Free Will? That, of course, is up to you.2


If you prefer less introspective fare, my other blog is for the more practical and professionally-minded reader